What is this Thing Called Qi?

In your first class at JinLi-Wushu Tai Chi you will hear the word “Qigong”. A brief explanation usually follows. The word “Qigong” has two parts to it; firstly ‘Qi’ which is briefly described as vital energy or sometimes life force (and the topic of our discussion); secondly the word ‘gong’ meaning work, skill, labour, cultivation, or effort. So loosely translated, Qigong means energy work/skill. More specifically Qigong (pronounced “chee-gung” and sometimes spelt ‘chi-kung’), is translated from Chinese to mean “Energy cultivation” or “Working with the life energy.” Qigong is an ancient Chinese system of postures, exercises, breathing techniques, and meditations. Its techniques are designed to improve and enhance the body’s Qi, thus leading to improved health, well-being and hopefully, longevity. Which is why we do it!

According to traditional Chinese philosophy, Qi is the fundamental life energy responsible for health and vitality. So, simplistically we can call it energy, then casually continue with our class. However, there is more for those that are interested.

The scientific definition of energy is the capacity or power to do work, such as the capacity to move an object (of a given mass) in a given direction by the application of force. Energy can exist in a variety of forms, such as electrical, mechanical, chemical, thermal, or nuclear, and can be transformed from one form to another. It is measured by the amount of work done, usually in joules or watts. In the context of Qigong and Taijiquan, Qi is more than the above definition. If you have a strong background in science, then let it rest at energy. However, if you are interested in the ‘deeper’ picture, let me continue.

The practice of Qigong has its origins alongside those of traditional Chinese medicine (TCM). Qi is a big concept in TCM and the meridian system. The purpose of an acupuncture treatment in TCM is to modify and balance the flow of Qi in the human body to restore health, and so it is with our Qigong practice.

The origin of the Chinese character for Qi gives us some insight into how they saw it and came up with an understanding of it. 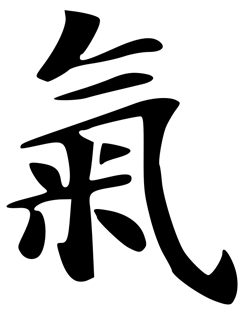 The Chinese character for Qi is a combination of the character for ‘vapor’ or ‘steam’ over the character for ‘rice’. The ancient Chinese did not have the scientific structure for understanding the nature of reality as we do today, but instead viewed it in terms of what they knew. Observing the vapor or steam coming off a pot of boiling rice, which had the smell of rice, they surmised that the vapor contained the essence of the rice. Extending this to human beings, animals, and the natural world, they came to believe everything contained this ‘vapor’ or ‘essence’ which they called Qi. They realized that to be healthy, that this Qi had to flow unimpeded and abundantly in the body. But it also flowed in all of nature. It was seen as the animating force that gave everything life and was in all things.

From this point the question becomes, how far down the rabbit hole do you what to go? Qi is in all things; in us, the air we breathe, the food we eat, the sunshine we receive, the cosmic radiation that falls on the earth. Qi is given different qualities depending on its function and where it occurs. This also applies to Qi in the body. There are different types of Qi; nutritive Qi, prenatal Qi, defensive Qi, stagnant Qi, and the list goes on. For our purposes in class, we can think of it as vital energy, life force, that which animates us, or for the scientific, simply energy.

In our Qigong and Taijiquan practices, we move our bodies, breathe and focus in a prescribed way. This is to encourage the Qi to flow more freely, to possibly accumulate, and hopefully come into balance in our body. Breathing correctly allows us to take in Qi from the air, bolstering our internal Qi.

The complexities of Qi theory take us solidly into the realm of TCM theory which is a massive subject. For us in class we do not need to believe in Qi, or to understand what it is other than simply a form of energy if you so choose. We will, however, still receive the benefits to our health, well-being, and longevity regardless. From my perspective the notion of Qi adds so much more depth to my practice and adds a cultural context to the origins of what we practice in class.