The Fúchén (拂尘 as spelt in Wudang Wushu or 佛尘 as spelt for Taiji), also known as the Horsetail Whisk, Fly Whisk or Dust Brush, is one of Chinese Martial Arts’ most unorthodox and paradoxical weapons. It has been steeped in mystery for centuries but ironically, has gained great popularity with Western practitioners in the 21st Century.

The Fúchén (Fu-chen, Fu Chen, Fochen) is essentially a whisk or brush made by binding the hair from a horse’s tail to a long wooden handle. Throughout Chinese history the Fúchén has come in many guises from being as simple as palm fibres bound to Smilax root, through to the use of a variety of animal hairs including Yak, being bound with hemp onto a wooden shaft. The most luxurious and expensive were of course the whisks combining unusually coloured horse hair with handles made from things such as Cinnabar, Ivory, Mahogany, Sandalwood and Ebony. 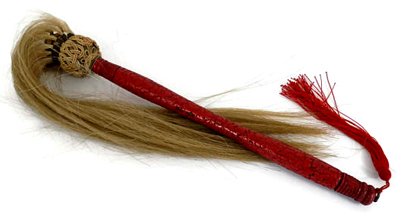 Today however, many of the whisks are made from synthetic fibres made to look like horse hair. The prevailing view is that, while they are not natural nor as beautiful, they fall in line with the Daoist and Buddhist philosophical principles of not causing harm to other living things. An interesting reflection when the vast majority of the whisks are bought today for use by martial artists. Although to be fair, there wouldn’t be too many wushu practitioners now who would choose to use a fúchén in a “real fight” situation.

This humble tool, dating back to as early as the 2nd Century BCE, originally designed to whisk away flies and mosquitos, and to gently sweep dust from delicate surfaces, has always been considered the symbol of Daoist monastic life, particularly in Wudang Mountain, Hubei Province, China. However, its use has actually been more far-reaching than that. We can see it turning up in Hindi, Jain, Buddhist, Polynesian and even African Maasai culture. In all cases though, while we would expect a tool such as this to be used by peasants and workers, it has actually stayed firmly within the confines of monasteries and monarchies as a representation of authority or its polar opposite, humility. 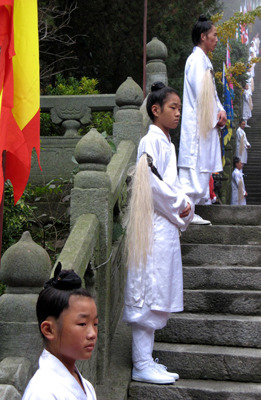 Daoism
In Daoist practises, the Fúchén is believed to have the power to sweep away desires and evil influences both in the environment of the holder and within their own thoughts, bringing them closer to transcending the mortal realm. Many famous Taoist’s have been depicted holding a whisk including Laozi himself, the great philosopher Wang Chongyang, and even the Monkey King’s Taoist master in “Journey to the West”. In early times, a Daoist student would be sent out of the temple for 3 years to practise as a wandering monk. His teacher would give him 3 gifts to take on his journey in the hope of his devout return, one of which was the whisk. The whisk would remind the student that evil thoughts were just like mosquitos and could be swept away. If the student was successful in his journeys and returned to the monastery, he could continue his training and eventually, become an immortal. 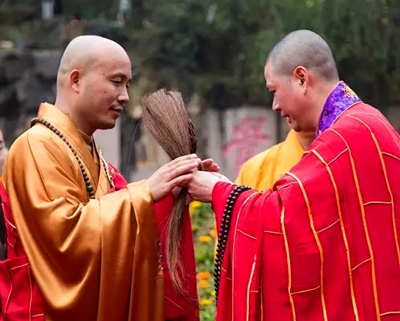 Buddhism
The Buddhists use the Fúchén as a symbol of monastic rank. It is not uncommon for Chan/Zen Buddhist Abbots to hold whisks when giving discourses on the Dharma, symbolizing their ability to pass on spiritual teaching, along with respecting the wisdom and beauty of the teachings themselves. The whisk is said to represent a “sweeping away of ignorance and mental afflictions” that are the root of suffering, therefore helping the practitioner to move closer to enlightenment.
As can be seen in both Chinese philosophies, the fúchén symbolises a sweeping away of evil thoughts, cleansing the mind, and in so doing, leading one to a state of enlightenment and immortality. It was also seen as a compassionate way of keeping flies and mosquitos at bay, as killing was seen as bad for one’s spiritual journey. Yet from both of these belief systems and other areas within China, the whisk became a martial arts weapon capable of killing and maiming.

Use of the Fúchén as a Martial Weapon

The use of the Fúchén as a martial weapon was popularised by the Wudang Daoist Monks. They brought the whisk to its current level of notoriety especially given that many lay people believed it to be the only thing the Wandering Monks had available to protect themselves while out on their pilgrimage for acceptance by their masters. In actual fact, one of the other things the Wandering Monks were given when leaving the temple was a sword, so it can safely be assumed they would have used both weapons for self-defence if required.

There are some magnificent Wudang double-weapon routines featuring the use of both the sword and the whisk. The sword being another significant item in the Daoist assemblage of purifiers, having the ability to “cut away” negative ideas, influences and evils.
The whisk was used as a fundamental part of the Daoist martial training but, while there are fewer writings available, it is believed the Buddhist Monks also used the whisk as a weapon. With everything in life, it is difficult to keep something truly secret, so lay people through warring and happenstance were also exposed the effective use of this humble object, and integrated it into their own martial training with minor variations and adaptations.
Techniques
And so we come to the weapon that the Fúchén is seen as today. A weapon that truly combines the Yin and the Yang, with a hard handle and a soft, whip-like tail. A weapon that on its shaft has one end rounded and the other end mounted with a conical metal tip hidden under its tail. A weapon that has its own set of techniques but also takes on a shapeshifting guise when we see techniques from the broadsword, straight sword, whip, dart, dagger and short staff. 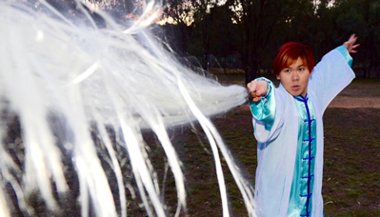 There is a veritable feast of applications that can be seen in the use of the whisk as a weapon. Again the whisk exhibits its complete balance being as comfortable in defence as it is in attack.
In defence it can block, deflect, wrap and coil to protect the body, cloud, sweep, and even snatch an opponent’s weapon before counter-attacking, which is of great use when surprise is the key to winning a fight.
In attack it can be used to strike from a wrap and coil, snap, launch a pressure point attack or divide tendons, strike to break bones, pull, snap, sweep or stab.
However, what we shouldn’t lose sight of when considering the Fúchén as a weapon is its equal demand on us internally as externally. For it to truly shine, the practitioner must, as always, ensure that their movements are in tune with their intentions, that the intention must be in tune with the Qi, and that the Qi must have originated from the Shen. When this is in line, the whisk will flow like water and sigh like the wind but strike with the ferocity of the tiger and accuracy of the snake. 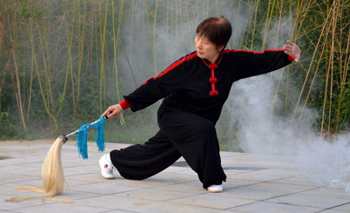 To be at one with the whisk requires you to be agile but also to possess grace and harmony of spirit. The mind needs to be quiet and free but the body needs to be responsive. The whisk holder needs to be soft on the outside but feel the strength on the inside, to use the body efficiently and the mind with clarity.
In summary, the Fúchén is exotic and ordinary, humble and regal, simple and complex, celestial and mortal, mysterious and obvious, compassionate and combative, gentle and powerful... the epitome of Yin and Yang.
For anyone who wants to truly experience the Yin and Yang in a weapon, you cannot look past the Fúchén. There is a famous Daoist saying that “the person who holds the whisk is not an ordinary person.” Never have truer words been spoken. 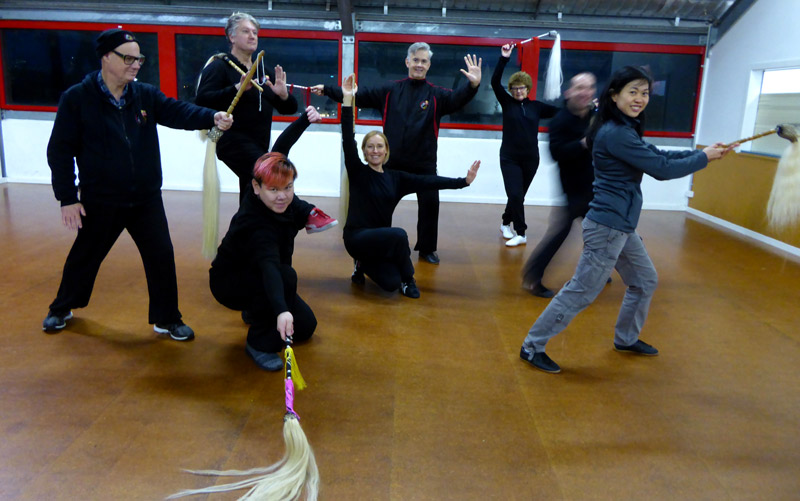