Taijiquan biomechanics? I’m sure the mere mention of those words would draw blank stares from most people, especially tai chi practitioners. We’ve all had the experience in life when we’re out shopping, where we know in our minds what we want, but we have no idea what the thing we want is called, making it almost impossible to find. Well, a tai chi biomechanics workshop is one of those things. Hearing the name alone might not create an association with anything familiar, but when we discover what it’s all about, we suddenly realise it’s something we’ve been wanting to find for a very long time in our tai chi journey of self-development. 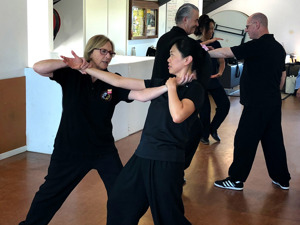 So, what is biomechanics exactly and how does it tie into tai chi practice?

Put simply, biomechanics is the science of movement of a living body, and it is concerned with how muscles, bones, tendons, and ligaments work together to produce movement. In sports science, an understanding of biomechanics is used to analyse movements in order to improve sports performance and minimise the risk of injury. This concept isn’t new to the tai chi world. It’s clear that the founding tai chi masters had a very profound understanding of the body and the way it moves because the applied science of biomechanics is incorporated into each and every movement. A lot of thought has gone into tai chi, as I discovered from this workshop. 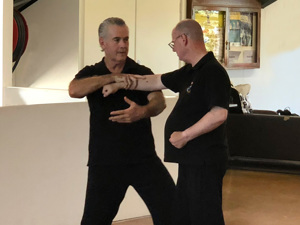 Tai chi is composed of a set of movements, executed in a sequence to tie them together into a form, such as the Simplified Yang Style 24 Taiji form. Each movement, such as “Part the Wild Horse’s Mane”, is a martial arts technique with various martial applications. As students, once we learn the basic movements and the Taiji form sequence, we need to take our practice to the next level by understanding what we’re actually trying to do in the movement, what the intention of the movements is, not merely parroting our teacher’s explanations.

When practising tai chi, we’re told that “qi follows yi”. In other words, the concept that energy follows intention. When practising the movement “Wave Hands like Clouds”, what are we doing precisely? Are we washing windows, or is there much more subtlety and nuance than what appears to be elegant hand waving to an outsider unfamiliar with tai chi? The workshop addressed this concept by looking at the martial applications of various movements drawn from the Simplified Yang Style 24 form. 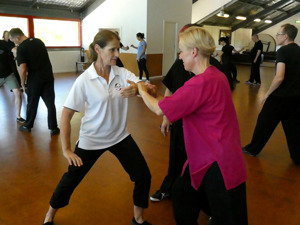 As we explored a selection of movements, and examples of the various martial arts applications for each one, I felt that I personally gained a far greater appreciation of the movements. It became much clearer for me what my intention was with each movement, allowing me to correctly move my body in a more natural way, with greater stability and balance.

One thing that was very clear from the workshop was that when you execute a tai chi movement with the right intention, your brain recruits all the necessary muscles to make that movement happen in an optimum way, and as a result, the movement looks and feels ‘right’. Right not only in the sense of technical accuracy, but in the impression it conveys to an observer, such as a judge in a competition! A trained observer can tell the difference between a person performing flowing choreography and a person moving with real intention as they execute their movements. A movement that involves pushing an opponent really looks like pushing an opponent, sans the second person. 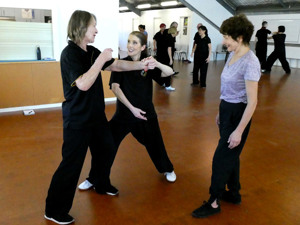 From my own experience, moving with the intention of executing a martial arts technique looks and feels different, you can see and feel the power in the movement, because the brain is sending signals to all the necessary muscles to work together in a specific way. When this happens, we gain the maximum health and fitness benefits from the time spent training. I really loved how the workshop consolidated lots of my tai chi learning and helped me ‘connect the dots’ to better understand the big picture of what tai chi is all about and how it works.

In the workshop, it was explained that the practical application within each movement can be executed in a variety of ways, which we explored with our training partners in this very much hands-on workshop, balancing the theory nicely. From these exercises I not only learned more about the martial arts aspect of tai chi, but also experienced how the body actually moves naturally when the techniques are executed correctly, and more importantly, what happens when things are done incorrectly. 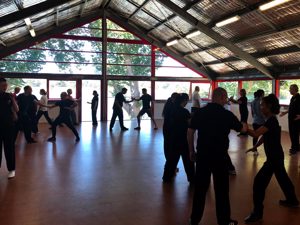 We all question things, especially when we can’t see the whole picture. Every student, as part of their training experience has received guidance from their instructor, with adjustments and corrections to stance, posture, and positioning of arms and shoulders for example. The thought does cross many students’ minds - what difference does it make if my stance isn’t quite perfect, if my rear hand isn’t pointing this way, if my elbow is a bit high, or my arm is held too close or far from my body, and heaven forbid, if my eyes are looking somewhere else when executing a movement? 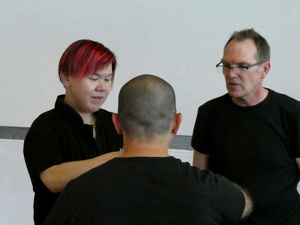 The biggest eye opener in the workshop was when we explored what happens to the application of tai chi technique when something seemingly insignificant is out of place. Working with a partner, we ‘tested’ each other’s postures in various techniques, as well as their execution, by first performing the techniques correctly and then introducing, in a controlled manner, simple mistakes that students often make. We were able to gauge from firsthand experience how detrimental certain maladjustments in form can be. I never suspected that something as minor as the positioning of the lower hand in the “Part the Wild Horse’s Mane” movement can affect the strength of the lead hand, or that my training partner might be able to push my lead arm aside when my eyes weren’t focussed in the right direction! 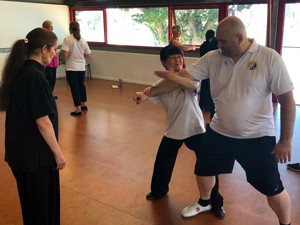 Honestly, it was such a rude awakening to realize that lots of techniques don’t work as well or won’t work at all unless they’re done correctly, and that the early tai chi masters designed them the way they did for a very good reason. Now I understand my teacher’s tireless and patient efforts to help me keep my shoulders down and all those other minor adjustments which really do make a world of difference. As an assistant instructor, this experience impressed upon me the responsibility of teaching tai chi properly and the effort required to ensure that students receive all the attention necessary to refine their form over time. Talk about a major perspective shift. After this workshop I can honestly say I now see my tai chi through new eyes. 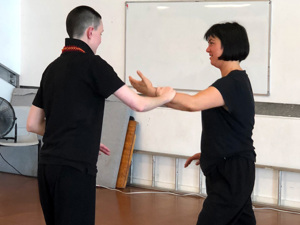 The biomechanics of tai chi became apparent when we explored the concept of ‘neutral positions’, where the body and its limbs have maximum mechanical advantage and strength due to the relationships of joints and muscles to each other. After seeing how the effectiveness of tai chi techniques were compromised when the movements weren’t executed correctly, we were introduced to the idea that when movements were performed in certain ways (correctly, whether in small frame or large frame form), the hands and feet were in an optimum position to take action, such as in responding to an attack, and best placed for the greatest mechanical advantage to perform at maximum strength.

Another discovery for me was the way the body locked into a solid, integrated structure in certain stances and arm positions, such as with the “Ward Off”’ (Peng) and “Part The Wild Horse’s Mane” postures, where many muscles were recruited through limbs and ‘core’ to work together to create a rock-solid base of stability. At that point force could be generated through the legs, amplified through the waist and delivered through the arms in a powerful kinetic chain, much like a whip.

As a student of tai chi, you discover that you can always go deeper and deeper, and this is precisely what this workshop did. It took students of all levels to a new personal depth of understanding. Coming out of this workshop it was clear that the early masters who founded tai chi knew their stuff! They understood where the body was at its strongest and weakest and developed the postures to reflect that. They had an intimate understanding of the biomechanics of the body to recognise which movements were the most powerful. They understood how the body could generate immense power without the need for great muscular strength by getting the whole body to work as one unit, utilising the power from the body’s largest muscles to drive the movements in the execution of martial arts techniques. Even though traditionally in the East, the ‘whys’ are never really explained in a Western, analytical way, this workshop really shone a light on the deeply buried wisdom ingrained through every strand of the art of tai chi. 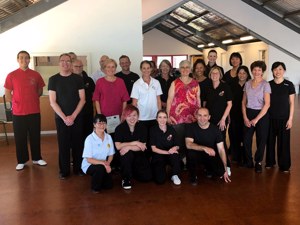 As a trainer myself, I know a good workshop, and having spoken to many fellow participants, we all had a similar experience in that we were so totally absorbed and engrossed in the workshop activities, that we lost track of time, and were so enthusiastic about what we were learning and practising that we were quite surprised when we reached the end of the three-and-a-half-hour session. Even on a hot day, everyone was alert and full of energy at the end of it, and were left wanting more. Predictably, everyone asked for another workshop so I’m now patiently waiting to learn more…