Qigong has its origins amidst the creation of Traditional Chinese Medicine and Taoist thought and philosophy. Most will have heard mention of Yin Yang in relation to our Qigong and Taijiquan, and if not, at least in relation to the Chinese culture.

Five Elements Theory arose in Taoist thought and philosophy through the observation of nature and its cycles. The Taoists wanted to understand how the universe worked and how everything related to us as human beings. They observed the heavens, the seasons, the weather, the animals, and all natural phenomena to come up with a theory of ‘everything’, or rather a very complex understanding of all phenomena.

In Taoist cosmology, Yin Yang was born out of Tàijí’s action from a state of nothingness known as Wújí. Wújí correlates with the void or zero point in western sciences’ Big-Bang Theory. In our Qigong and Tai Chi practice we know Wújí as quiet standing, totally relaxed and with no thought before we commence our routine.

In the diagram below we see a blank circle representing Wújí; before the Big-Bang, the void, nothingness, limitless and undifferentiated, no consciousness, no time nor dimensions. Then comes Tàijí; state of undifferentiated absolute and infinite potential, oneness before duality, “Supreme Ultimate”. Its action creates duality and Yin Yang is born; polarity which originates from Wújí through Tàijí’s action, function or potential. It gives our universe distance, dimensions, time, and space. A world of no extremes where nothing is absolute. Cyclic nature and change are born into existence.

But delving deeper into Taoist thought and philosophy we find that this is not the end of the story. Arising from the movement between both the polarities of Yin and Yang, springs the Five transformational energies. Each of these transformational energies has differing concentrations of Yin and Yang. These five transformational energies are known as the Five Elements, referred to as WǔXíng in the Chinese language. These elements are Fire, Earth, Metal, Water and Wood. They are seen to constitute all life and existence by the Taoists. We must remember that the early Taoists didn’t have scientific instruments to understand atoms, electrons, gravity, electricity or quantum forces as we have today. They only had their five senses and what they intuited from this. The action of the Five Elements led to the creation of the “Ten Thousand Things’ or Wàn Wù (all of existence and all phenomena) in Taoist philosophy.

Now we need to understand that the Five Elements aren’t what we know in chemistry from the periodic table. WǔXíng is usually translated as five elements, five phases, five movements, five steps, or five energies. It is seen as five dynamic qualities or energies that can be perceived in all natural phenomena. Sometimes referred to as the “Five Qì’s” in some texts.

More than anything, the Taoists saw the Elements expressed in nature through the seasons. The properties of an Element were associated with the respective season. They saw that the seasons affected their bodies, temperaments, emotions, their health, and well-being. Thus, each element was seen to have core qualities and characteristics. In Traditional Chinese Medicine (Acupuncture and Chinese Herbal Medicine) the Elements are used in diagnosis and to determine treatments based on their properties. Each organ associated with the meridian system in TCM has a corresponding Element. The correct balance and harmony of these elements, and hence the organs, leads to optimal heath. So, this is where we see the 5 Elements theory relating to our Qigong and health.

Each Element has a color, direction, season, body organ, body tissue, sense organ, taste, emotion, and personal character associated with it. The table below gives a much more detailed picture of the properties of each element. 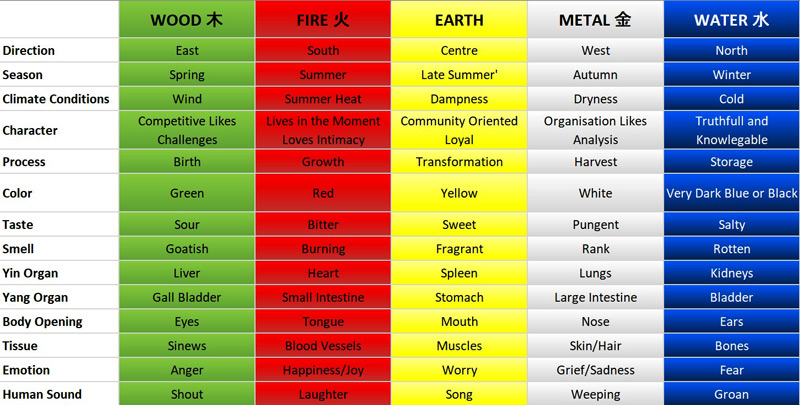 In Traditional Chinese Medicine the emotions are seen to damage the internal organs; too much worry damages the function of the Stomach and Spleen thereby affecting digestion and absorption; too much anger can damage the Liver and Gall Bladder; and too much fear can damage and weaken the Kidneys and Bladder. With respect to the 5 Elements, ‘negative’ emotions were seen as an imbalance or the possible cause of an imbalance in the respective Element.

Many Health Qigong routines have been designed to dredge, clear, and balance the Meridian System in the body (Meridians from Traditional Chinese Medicine are channels that flow through the body carrying Qì, a bit like the vascular system in Western Medicine). However, there have been many Qigong forms specifically designed to balance The 5 Elements in the body (and hence the organs), leading to health and vitality, funnily enough called Five Element Qigong.

Each animal is believed to give you the qualities listed above. For example, if you have constant mental chatter and are worrying excessively, the Bear movements are seen to correct this, leading to stability and a feeling of being grounded. The Monkey, however, should leave you feeling more joyful and happy. When doing this Qigong set, we are encouraged to take on the quality of the animal, e.g., feeling heavy and lumbering like a bear or agile and playful like a monkey.

All Qigong routines from the ShíBāShì series to the Bā Duàn Jǐn will balance the Elements and thus your emotions. 5 Elements Theory is deeply embedded and foundational to all Qigong, just as it is to Traditional Chinese Medicine and Acupuncture.

If wanting to engender a particular quality of an Element you could choose a specific movement that benefits that quality from any Qigong. However, this implies a greater understanding of The 5 Elements Theory, possibly some meridian theory, and which movements affect what. Perhaps this is another topic for a future article.

So next time you practice your Qigong routine just know that you are balancing your Five Elements and have been all along.