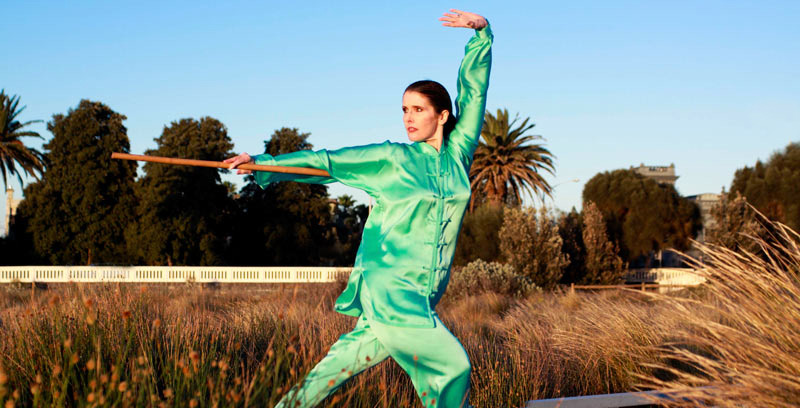 Dong Yue (East Mountain) Taiji is a style that many people consider to be the Taiji of the 21st Century as it unites diverse martial systems into a cohesive whole. Created by Professors Men Hui Feng and Kan Gui Xiang to commemorate the New Millennium, Dong Yue focuses on the concepts of Heaven, Earth and Man, combining the very best of the internal martial arts Taiji, Xingyi, Bagua, Baji, Chuo Jiao and Fanzi to create a harmonious and rich expression of Qi flow and balance.

Professors Men and Kan created the style to enhance the concepts of balance and focus in Taiji practice. Each routine incorporates movements on both the left and right side to create a more physically and psychologically-attuned approach. The use of both sides of the body, by necessity means both hemispheres of the brain are stimulated leading to a collaboration between feeling and reasoning; emotion and analytical thought; yin and yang. The concept of balance is further enhanced by their concept of Heaven (Yang), Earth (Yin) and man sitting as an energy conduit between Bai Hui and Yongquan.

Dong Yue (East Mountain) Taiji was presented to the world by Professor Men Hui Feng atop Tai Shan to commemorate the birth of the 21st Century as 4 Billion people around the world looked on. It’s unveiling on top of a mountain was elevated to even greater heights when, in June 2013, three Chinese astronauts practised Dong Yue Taiji in China’s trial space laboratory, Tiangong-1, while orbiting the planet.

The Duan Gun or Short Staff (usually 13 hands in length) is the oldest weapon known to man. Picked up in the forest to strike animals or to ward off invaders, the Duan Gun continued to be used by peasants throughout the ages as an affordable, accessible means of self-defence. Wushu practitioners turned the use of this weapon into an art form and today we see it being used not only as a martial weapon, but also as a way of cultivating internal energy and wellbeing through both the martial arts and Qigong – a simple weapon with a complex history. The Short Staff truly embodies Professor Men and Kan’s Dong Yue concept of balance as both hands hold the staff, and the whole body moves with it. Most of the common wushu weapons usually feature extensive use of the right hand whereas the staff utilizes both hands equally. However, it should be noted that the other weapons in the Dong Yue “arsenal” are frequently swapped from one hand to the other to encourage strong left hand/right brain development.

JinLi was very excited to have the opportunity of studying the Dong Yue Taiji Duan Gun (Short Staff) at a weekend workshop recently. The workshop was conducted by our own Master Tara Brayshaw who has trained with the creators of Dong Yue Taiji, Professors Men Hui Feng and Kan Gui Xiang as well as pursuing ongoing training with their disciples. She is passionate about Dong Yue Taiji and has studied many of the forms in the system inc. Quan (Barehand), Jian (Sword), Dao (Broadsword) & Qiang (Spear). The response to the workshop was overwhelming with many participants “falling in love” with the Duan Gun. If you are interested in attending future Dong Yue Taiji workshops please feel free to contact us.